Apple to release just "One more thing" next week 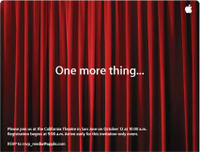 Apple will be hosting an invite-only event next week on October 12. No details are given, but this "One more thing..." event will be held at the California Theater in San Jose, California. The invitation shows theater curtains too, and because of this some people surmise that this may be the launch of something video related, such as the iTunes Video Store and the iPod video.

Before anyone jumps for joy at the idea of a new iPod that can play BitTorrented DivX TV shows, please note that even if Apple were to release an iPod video, it would not likely support playback of these files. Unlike the situation with MP3 many years ago, there is no single universal video format which geeks and casual users alike use. If Apple were to do this, Apple would likely stick with its own QuickTime codecs for commercial video content, especially since QuickTime is already one of the top two formats on the web for it. Indeed, Apple's coup would be to gain the rights to distribute that commercial video content through an iTunes Video Store, not to play existing ripped video. In short, the fight of the future is between Apple's QuickTime and Microsoft's Windows Media. No other video format matters.

If this is purely a non-Mac announcement however, one wonders what happened with the dual dual-core (quad) G5 970MP Power Macs and the G4 7448 PowerBooks. I think we can say that it's likely these products will be released, but it's just a matter of when.

Think Secret suggests the event is to announce the new Power Macs and PowerBooks.
Posted by Eug at 11:24 PM No comments:
Newer Posts Older Posts Home
Subscribe to: Posts (Atom)