ING Canada today released its banking application for the iPhone. 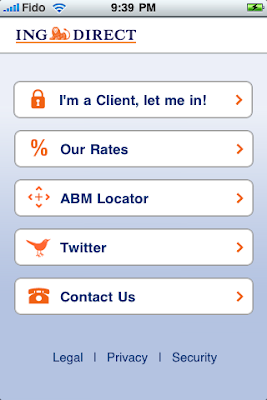 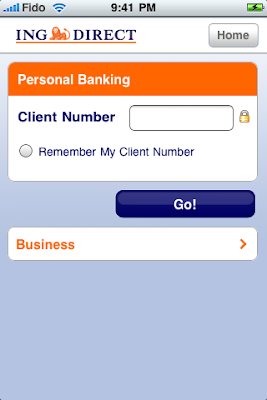 It is remarkably effective and easy to use, for accounts that have been previously set up online. Within minutes of installing the application I had already transferred some money from my ING account to a non-ING bank account. In fact, it was even simpler than online banking with some banks through Safari. No browser incompatibilities to worry about.

There was even an option for transferring either Canadian or US currency. I tried the Canadian $ transfer, but not the US $ transfer, as I don't have a US account. 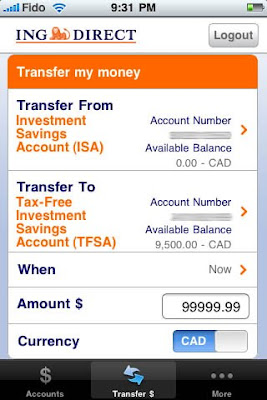 There was one glitch where if I tried initiating a transaction with the "Later" date option using its built-in calendar, but instead chose today's date, it claimed today was a weekend day and would not let me proceed. However, choosing the option for a transaction "Now" worked fine. It looks like a quick update is in order to fix this bug.

There are a few other included options like the savings, GIC, and mortgage rate listings and fairly useless features like the Twitter posts and automated banking machine locator. There are all of 4 bank machine sites in all of Toronto according to the map. 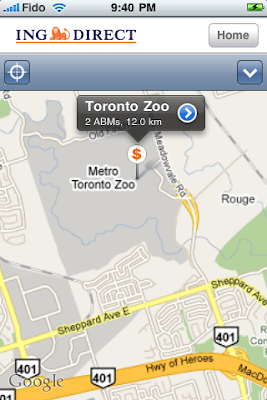 CIBC has already had a banking application for months now too, but I hadn't been able to try it because I wasn't a CIBC client. I've heard good things about it though. 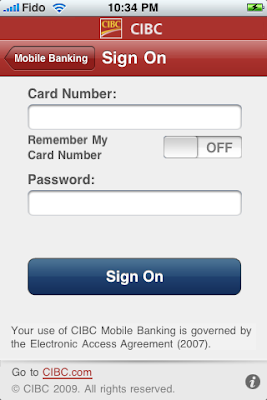 I hope the other big banks go this same direction soon. These apps are too simple and useful not to have. Royal, TD, Scotia, and BMO, where are you? To be fair, some of the others have browser based mobile pages, but it'd still be nice to get dedicated iPhone apps.