Evidenced by the shock and dismay out there, Apple's new draconian new iPhone OS 4.0 programming requirement seems like a big blow to independent developers. I can't claim to be an educated coder or anything like that, but even as an outsider, this sends shivers down my spine.

IANAL, but I have to wonder if the regulators could consider this anti-competitive.

P.S. Until today I had no interest whatsoever in Android. Now I think I'll have to take a closer look at Google's baby to see what all the fuss is about. 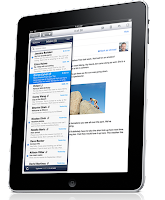 A colleague made the trek down south to the US of A and braved the Apple Store crowds to buy an iPad this weekend. As expected, the machine is sleek and feels well built, and really does look like a giant but sexier iPod touch.

Of course, the larger screen is a massive improvement for its functionality, as compared to the iPhone and iPod touch. Things are easy to read and the width in portrait mode is perfect to fit most standard documents and email messages. iPhoto's Multi-Touch capabilities are excellent, and are really sleekly implemented. The machine is responsive for surfing and email and in its current form factor could easily replace a laptop for this purpose. Embedded video in sites such as CNN.com work fine, but unfortunately, the lack of Adobe Flash support is still a major impediment on many other popular sites. For example, videos on my favourite news site, The Globe and Mail, are dependent upon Flash and therefore are not viewable on the iPad. Ironically, the first video I tried (and failed) to view was the Globe's iPad review.

Typing in portrait mode is somewhat annoying as it's too cramped for touch typing, but it's still a much, much better experience than on an iPhone. Touch typing in landscape mode is possible, but it would take some getting used to. I was constantly adding extra characters by accident, when my fingers inadvertently brushed the screen.

The iPad is light, but I would find it uncomfortable to hold in place like a book for hours on end. Not that I would anyway, since it suffers the same problems as laptop screens for reading. If you want an eBook reader you'd be better off getting a dedicated eBook reader. I personally prefer real paper though. Call me old school.

I did not have enough time to give iWork a good run through, but the apps look sleek on the machine. The iPad would probably make for a good on-the-road machine for Keynote presentations, but then again on the road I'd still be taking my MacBook Pro, making the iPad superfluous.