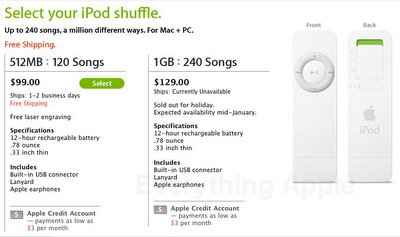 It seems the 1 GB was quite a popular item for Christmas shoppers. It is now completely sold out at Apple. This suggests we may see an updated version of the shuffle in 3 weeks, at Macworld.
Posted by Eug at 1:47 PM No comments:

Apple to kill Aperture's iBook support, and clues to a widescreen 13" PowerBook?

According to the first iteration of Apple's Aperture Compatibility Checker, Aperture supports the latest iBook. However, according to Aperture Checker 1.0.1, that is no longer the case: 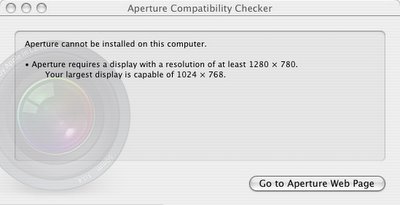 Aperture 1.0 does in fact currently support screen sizes under 1024x768, and installs fine on current iBooks with the Radeon 9550. However, if updated versions of Aperture enforce the new 1280x780 requirement, that means that all current iBooks will be excluded. That isn't terribly surprising I suppose, since Aperture's technical specifications have never included the iBook as a supported machine despite what the Aperture Checker software said.

Even if the 1280x780 restriction is enforced at install, one wonders if it still may be possible to install the software an a current iBook without hacks to Aperture, just by installing the Screen Spanning Doctor and then plugging in an appropriately sized external display. That won't work though if Aperture 1.0.1 includes checks for the resolution within the app itself and not just in the installer.
Posted by Eug at 12:50 AM 3 comments:

H.264 acceleration on GPUs is now a reality, courtesy of ATI... if you have an X1x00 series GPU. This is just in time too for Blu-ray and/or HD-DVD, as these technologies have mandatory support the very compute-intensive H.264 codec.

To give you an example of how well this technology works, AnandTech has benchmarked a real world system decoding Apple's H.264 HD QuickTime videos. The H.264 speedup is impressive, and shows a significant decrease in CPU utilization during playback of these videos.