The hackers out there have gotten various PC video cards to work in the Cube, and one of their latest successes is the GeForce 6200 (even though a Mac version of this card has never existed). I was lucky enough to get a hold of one of these and test it against various other video cards that work in the Cube.

All of the above cards are fanless. The Rage 128 is the coolest running, while the GeForce2 MX seems to be the hottest. The Radeon 9200 and GeForce 6200 both get very warm under heavy usage, but their heatsinks do not get as hot to the touch as the GeForce2 MX. (The GeForce2 MX tested here is the one found in older G4 Power Mac towers, as opposed to the original Cube GeForce2 MX which had a large Cube-specific heatsink.)

The first test is OpenMark 1.60, a basic OpenGL benchmarking utility. 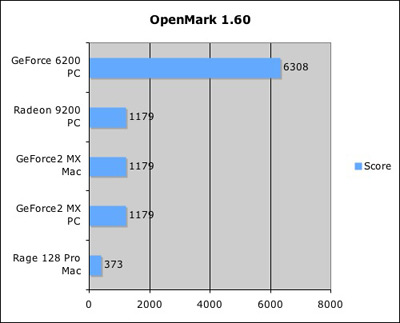 As you can see, the results generated by this application are not particularly fine-grained, as three of the video cards get the exact same result. It does show the marked performance advantage of the GeForce 6200 though.

OpenMark also tells us what level of OpenGL is supported by these GPUs:

The second test is the popular Cinebench 9.5 OpenGL benchmark. 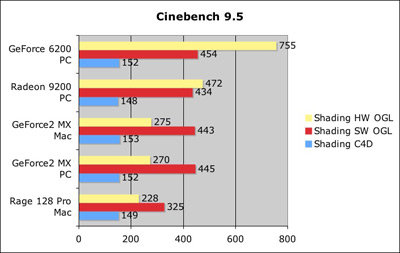 Hardware shading on the GeForce2 MX is actually slower than software. It takes the Radeon 9200 to (barely) show some hardware advantage over software. In contrast, the GeForce 6200 shows a big performance boost with hardware 3D acceleration.

It's interesting to see that the ATI Rage 128 Pro is significantly slower in the software bench than the other GPUs. This could be related to its lack of Quartz Extreme support, as this GPU is the only one of the four incapable of this OS X feature. I also note that in daily usage even things like basic 480p H.264 QuickTime playback is problematic on the ATI Rage Pro.

Would I recommend the GeForce 6200? Not necessarily to the average user. The 6200 is not an officially supported card, so it's possible one could run into problems. For instance, while it works perfectly over VGA, I have noticed that over DVI, things like Exposé and the Genie Effect aren't quite as smooth. However, otherwise the 6200 is a fine performance upgrade, and gives the 6 year-old Cube full Core Image and Core Animation capabilities.
Posted by Eug at 9:40 PM No comments:
Newer Posts Older Posts Home
Subscribe to: Posts (Atom)