My Macs and the Xbox 360 HD DVD drive 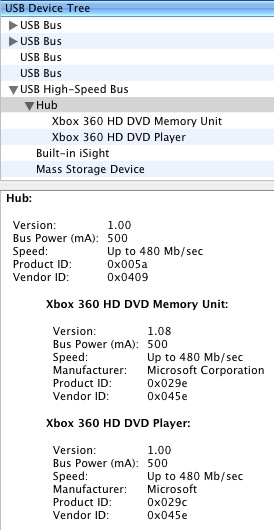 There is a separate Xbox 360 HD DVD Memory Unit listed because HD DVD players must include non-volatile memory for things such as user bookmarks, etc. On my Macs CDs and DVDs play fine using this drive, but commercial HD DVDs are not natively supported by OS X Tiger (yet).

With Windows Vista on my MacBook, commercial HD DVDs are recognized (but are not playable without the correct software). The drive is recognized as a Toshiba DVD/HD X807616 USB Device. Out of interest's sake, I checked out the disc sizes of some HD DVDs. King Kong (a 188 minute movie) is 27.4 GB, but Corpse Bride is only 19 GB. The Polar Express, a reference quality 100 minute disc, is reported to be only 13 GB.
Posted by Eug at 11:01 PM 4 comments:

Microsoft has recently released the HD DVD add-on drive for the Xbox 360, to rave reviews. HD DVD playback is apparently absolutely stunning with this setup, as it can output HD DVD's native 1080p24 content at full resolution using VGA, and up to 1080i over component connections. (I say apparently, because we Canadians still don't have this drive, although we'll probably get it this week.)

We've known for quite some time that although Microsoft is not supporting this drive on Windows, they didn't do anything to the drive to prevent its usage on a PC (according to Amir, a Microsoft executive who posts at the AVS Forum). Thus, it was no surprise when people proved that the HD DVD drive works on a PC. Also, unsurprisingly, it works on Mac OS X too.

With the proper hardware and software, commercial HD DVDs play back fine on Windows. Unfortunately, the same is not true on Mac OS X. While DVD Player.app does support HD DVD, I believe that it does not support VC-1 encoded material (which is what most commercial HD DVDs are), and does not support the copy protection and encryption used on commercial discs either. I am guessing that such support may come in 2007 however.