However, this GPU might be well worth the wait for those of you interested in running software like 3D games, Motion, or Aperture, since the 7800 GT offers a very significant 3D performance boost over the 6600 series GPUs.
Posted by Eug at 12:56 PM 4 comments:

It looks like they've gotten the power utilization down quite nicely in these chips, as the new 2.5 GHz puts out only 100 Watts maximum with both cores active. Estimates are that when the 2.5 GHz 970FX first came out it was somewhere in the range of 80-100 Watts, and that's for only a single core chip, with less cache, and also on a 90 nm process. The 2.5 GHz 50 Watt per core power spec for the 970MP likely means something like a 2 GHz low power single-core laptop G5 or a lower clocked dual-core laptop chip could be produced. In fact, Rohrer states that "low power, high performance" dual-core G5s will be available at 1.2 GHz and above. However, it is very possible that Apple won't release such a machine and will wait until dual-core Yonah or dual-core 64-bit Merom chips are available from Intel before moving away from the G4 in their laptops. As for the Power Macs, one suspects that Apple will wait until the Woodcrest Xeon chips are available before switching away from PowerPC. These dual-core chips are the server version of Merom, and are planned to have a maximum power utilization of about 80 Watts.

Rohrer also released SPEC CPU2000 scores yesterday for the 970MP. While the integer score of 1438 in mediocre, the floating point score of 2076 is quite impressive. Given the excellent fp scores, it's likely that the improvement isn't due only to the L2 cache boost. Other factors are probably also contibuting to the better fp performance (including for example possible improvements in IBM's XL compilers). In comparison, the current 2.26 GHz Pentium M 780 scores 1812 int, a significant improvement over the G5. However, Pentium M's fp performance suffers in comparison. A 2 GHz Pentium M Dothan has an fp score closer to 1100. Fortunately for Apple, Yonah and Merom are to get significant improvements in fp performance, according to Intel.

The new startup fabless semiconductor company P.A. Semi, today announced a new dual-core 64-bit PowerPC chip, to be released late next year. The 65 nm PA6T-1682M chip features dual 2 GHz 64-bit PowerPC cores with a shared 2 MB L2 cache, dual VMX units, dual DDR2 memory controllers, and several different I/O configurations. The chip apparently has not yet taped out, but is estimated to have per core SPECint performance of 1100 and per core SPECfp performance of 2255, all with a "typical" power usage of 13 Watts. While the SPECint performance is OK, it isn't great. However, if the chip were to live up to the hype and achieve the estimated 2255 score for floating point performance, that would be truly impressive, whether the score is peak or base, especially when the power utilization is considered. 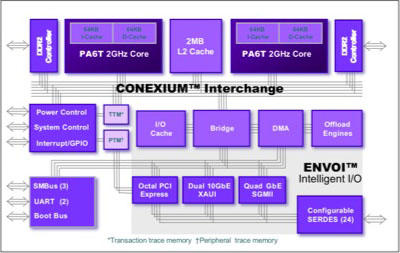 This is in stark contrast to Freescale's chips. The G4 currently also has reasonable integer and Altivec performance, but its floating point performance is poor. Freescale's next generation e600 line, due soon, will not significantly alter this situation since it essentially a tweaked dual-core version of the G4 in many ways. IBM's G5 provides floating point performance in spades, but IBM has not been able to provide a fast low power G5 option.

What does this all mean for Apple? Probably nothing, as Apple has already announced the switch to Intel. It should also be noted that P.A. Semi's chip will not ship for at least a year, and by that time Intel's dual-core 64-bit low power Merom should be available. Merom will provide vastly superior SPECint performance and at least reasonable SPECfp performance, albeit at higher power usage. It doesn't look like P.A. Semi's chips were ever in the cards for Apple. That would be fine for P.A. Semi however, since it seems that one of the main targets would be Freescale's embedded business, and they likely would not compete with the likes of Intel for the personal computer market. Another main target would be supercomputing clusters, where floating point performance and power efficiency are amongst the primary concerns.

Note again though that what we have here is still just prelimary information on a chip not due to sample for a year. However, P.A. Semi tomorrow will present the details of the chip at the Fall Processor Forum in San Jose. Hopefully we'll have a clearer idea of this chip's capabilities and its intended market tomorrow.
Posted by Eug at 11:49 PM 2 comments:

Well, that was quick. The new PCIe Power Macs (including the Quad) have only been out a few days, and Black Magic Design already has PCIe pro video capture cards for it.

Apple's QuickTime is doing very well these days, as evidenced by the brisk sales of QuickTime Pro licences at the Apple Store. Right now, QT 7 Pro for Mac OS X is third on the list, and QT 7 Pro for Windows is sixth. Certainly, a significant part of its recent success can be attributed to Apple's inclusion of both MPEG4 and H.264/AVC video support in its newest iPod, which also happens to be the number one seller at the Apple Store. QT 7 Pro offers the user the ability to export video from various sources to various different formats, and includes an "Export Movie to iPod" option for iPod-compatible 320x240 H.264 video. 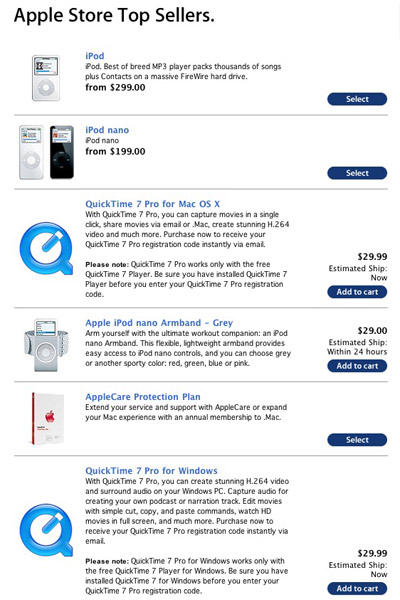 However, if you are looking to save some money, a number of free H.264 encoder options do exist. These include x264, which is used in ffmpegX and Handbrake, as wll as Michael Ash's excellent and free app, QTAmateur, which allows access to Mac OS X's built-in QuickTime export features (including iPod H.264 support) without the need for a QuickTime Pro licence.

By the way, Apple's description for the iPod in the top ten list is wrong. None of Apple's iPod models support Firewire now. While both the iPod nano and the iPod can charge over Firewire, there is no longer any support for Firewire file transfers or music synching.
Posted by Eug at 11:07 PM 2 comments:
Newer Posts Older Posts Home
Subscribe to: Posts (Atom)