Aperture 1.0.1 ran just fine on the G4 iBook with Radeon 9550. However, the latest Aperture 1.1 update kills this support for the iBook.

This was expected, as the Aperture Compatibility Checker program also specifies that there is an absolute requirement for a minimum screen size of 1280x780. This is of course completely arbitrary, considering that if one applies the Screen Spanning Doctor to the iBook and attaches an external screen, Aperture 1.1 will launch just fine, with a minimum size of 1000x685, well within the resolution limits of the iBook's built-in screen. Furthermore, if one unplugs the external screen, Aperture 1.1 continues to work fine. Curiously, when I ran this experiment, the external screen I attached was 1360x768, which just like the iBook's 1024x768, doesn't meet the minimum 780 vertical resolution. 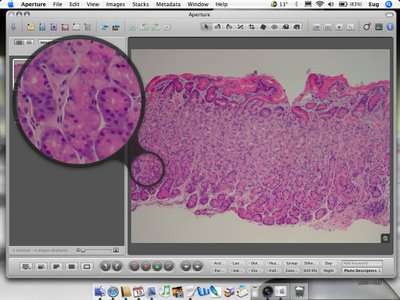 Hopefully, somebody will be able to patch Aperture 1.1 to remove this arbitrary limitation. Or, perhaps Apple will finally release that 13" 1280x800 widescreen Core Duo MacBook Pro with Blu-ray drive. ;)
Posted by Eug at 10:57 PM 6 comments:

Aperture 1.1, a significant update to the revolutionary all-in-one post production tool for photographers, runs natively on both Intel- and PowerPC-based Macs. The update features dramatically improved RAW image rendering and a new set of advanced RAW adjustment controls. Likewise, it delivers impressive speed gains on any Mac. At a new lower price of $299, Aperture is within reach of anyone shooting with a digital SLR camera.

Aperture 1.1 has now been released, at US$299 in the US and CAD$349 in Canada. Along with the price drop, Apple has provided a rebate coupon for those who purchased Aperture previously. Those who bought the US retail version can get a US$200 rebate, and those who bought the US academic version can get a US$100 rebate. I have not been able to find corresponding coupons for Canada or elsewhere however.
Posted by Eug at 11:21 PM No comments:
Newer Posts Older Posts Home
Subscribe to: Posts (Atom)