The long rumoured MacBook release for October 14 has been confirmed. MarketWatch reports: Apple sets up to release new notebook PCs

Apple Inc. on Thursday e-mailed invitations to media members for an event on Oct. 14 at the company's Cupertino, Calif. headquarters where Apple is set to rollout new models of its Macintosh laptop computers. The invitations, which read "The spotlight turns to notebooks," featured a partially obscured notebook PC coming out of shadows with a light upon the Apple logo.

I wonder if they still have that $20+ billion cash or if it's shrunk somewhat after the market meltdown. If intact, then approximately a quarter of Apple's market capitalization now is cash.

Apple has 17% of the consumer smartphone market

According to NPD data, the iPhone now holds 17% of the iPhone market.

That's huge, but the stats can be misleading, as they do not include corporate sales.

Monday saw a huge ripple in the fabric of the finance world, with our Canadian S&P/TSX dropping 11% and the US Dow Jones Industrial Average dropping 7.7%, before both finally pared the losses late in the day, to 5.3% and 3.6% respectively.

Earlier in the day, some in the media were already calling this Black Monday, but it certainly didn't work out that way for AAPL. Perhaps a few of the supposed short sellers that Steve Jobs blamed are finally getting spooked enough to leave AAPL alone. 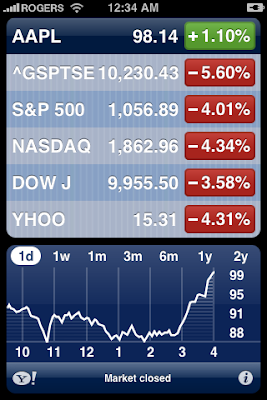 P.S. For some reason, the iPhone stock quote gadget has the wrong percentage drop for the TSX and the S&P 500.

iPhone in Canada reports that the 6 GB $30 smartphone data plan has been extended, although that plan no longer is documented on their public website.

The (new) official iPhone plans seem reasonable, but if you already have a good voice plan you don't want to part with, this $30 data plan is a great addition, especially if you want to tether your laptop with it (either using a jailbroken iPhone or another smartphone).

Posted by Eug at 12:07 AM No comments:
Newer Posts Older Posts Home
Subscribe to: Posts (Atom)