Aperture runs on the G4 Cube

To my surprise, Aperture runs on my Cube, and runs tolerably. I had to hack it to get it to run, given that the Cube does not have official Aperture support, but everything works just fine (albeit fairly slowly). This Cube does have a 1.7 GHz G4 which is adequate as far as G4 speeds go, but the real surprise is that Aperture has no problem with this Cube's GeForce 2 MX, a GPU that is several generations behind even the GeForce FX 5200 (which is also unsupported). The GeForce 2 MX does not even fulfill the hardware requirements for Core Image's GPU-based acceleration. That likely means that Aperture supports Core Image's Altivec fallback on the CPU, despite the fact the application is built never to run on a machine like this. At least this GPU has Quartz Extreme support though. One wonders if Aperture could run on even an older GPU like the ATI Rage 128, which does not even support Quartz Extreme.

I won't detail the Aperture hack here, but suffice it to say that there are explanations available elsewhere out there online, and a valid serial number is still required of course. For the sake of all the people out there with adequately spec'd G4 Power Macs, I just hope that Apple doesn't choose to disable the hack in the 1.0.1 update to Aperture.

Now I said it's tolerable on the Cube, but in truth maybe I think it's tolerable just because I didn't test it for too long. Fortunately, I already have a faster and fully supported iMac (G5 2.0 & Radeon 9600 128 MB). Aperture is not particularly fast on my iMac either, but at least it's a noticeable improvement, although nowhere near as fast as the dual G5 2.3 GHz Power Mac with GeForce 6600 256 MB I had the chance to test out with this application.
Posted by Eug at 2:05 AM 5 comments:

No PowerBook G5 ever

In case you've been hiding under a rock and somehow still believe a PowerBook G5 is coming, this c|net article should finally convince you otherwise. Michael Mayer, CEO of Freescale, states that IBM chose not to finish the work on a laptop version of the G5, partially so that they could focus more of their resources on chips for game consoles. He should a pretty good idea of the goings-on at IBM too, as he was general manager of IBM Microelectronics until November 2003.

He also states that Jobs wanted to go with Intel chips many years ago, but it was the promise of the G5 that kept Apple on PowerPC. That is not a complete surprise, since Rhapsody was even released to developers on Intel, and we are all well aware of Apple's Marklar project. Furthermore Jobs has had a long and good relationship with Intel, partially because of his days at NeXT, and because of personal relationships with Intel brass. However, back then Apple was in a precarious position, and in my opinion it would have been a lot more risky then for Apple to go Intel than now. I'm sure Jobs didn't need a huge amount of convincing to stick with PowerPC, especially when it was IBM doing the convincing with the potential of their G5.

One other interesting point made in the article is that Apple has a contract with Freescale that doesn't end until 2008. I'm not sure what that means, but I would be somewhat surprised to see G4 Macs sold after 2006. That said, there will be a lot of G4 Mac repairs needed for years to come. It is possible that this contract is simply to ensure adequate repair parts are available until institutional G4 Mac AppleCare contracts expire.
Posted by Eug at 11:06 PM 2 comments:

The DigiTimes reports that while new Intel Macs may be demoed at Macworld 2006 in January, they will not be released until June 6, 2006. That long of a lag time seems strange, but it's interesting that 06/06/06 date was mentioned (and not just for religious reasons). First of all, the date is exactly one year from the announcement of the switch to Intel. More important however is the fact that "666" has a special place in Apple's history, since the original Apple 1 was released at $666.66 (in 1976, making 2006 the 30th year Apple has been selling computers).

If that date is true, it could make sense for iBooks and Mac minis, since the cheaper single-core 1 MB L2 version of Yonah is scheduled for release in Q2 2006. However, I still hold out hope for a 13" PowerBook announcement in January. Such a machine could use a dual-core 1.66 GHz Yonah, or perhaps more likely, a single-core 1.66 GHz Yonah with 2 MB L2. Both chips are on target for release in volume in January.

One curious tidbit in the article is the claim that the new Macs will sport an "Intel Inside" logo. That seems particularly out of character for Apple, given Apple's extreme emphasis on aesthetics for its computers.

The article should be taken with a grain of salt though, since when it comes to Apple prognostication, The Digitimes has no better a record than the usual rumour sites, and it could just be that the sources quoted are simply repeating the June 6 date suggested last year.
Posted by Eug at 3:26 AM 5 comments:

Hints to an Aperture hack

A lot of people (including myself) have been complaining that Aperture has unnecessarily strict hardware requirements. Well, it seems the Aperture Compatibility Checker may provide some hints as to how to ease some of these restrictions: 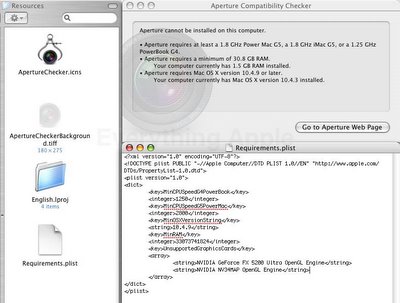 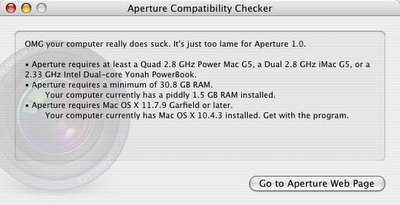