As usual, Teh Steve does not mince words. He said:

This is perhaps not surprising. The Blu-ray licencing requirements for an OS are said to be draconian, and I'm sure Apple doesn't want to mess too much with the underpinnings of OS X just to support a costly format that is still languishing in the market.

What makes this criticism especially biting is the fact that Apple sits on the Blu-ray Disc Association's Board of Directors.

Just a word of warning for those interested in the new aluminum MacBook: The lower end model does not include a backlit keyboard.

This is a disappointment. Besides the new trackpad, the one very enticing feature of the new design is the backlit keyboard. Hopefully the next iteration of the AluMacBook will include the illuminated keyboard.

Who knows... Maybe by that time Apple will also add FireWire-over-Ethernet support to the MacBooks. That's unlikely though.

The Apple Store is very misleading. Although Apple's website confirms in multiple places that the low end 2.0 GHz aluminum MacBook does not include a backlit keyboard, the Apple Store order page says it does. 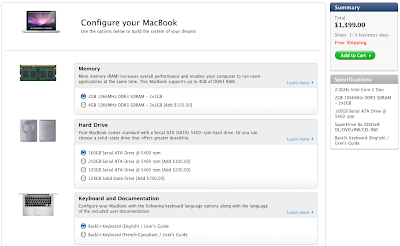 No new laptop for Everything Apple [Update: New laptop after all!]

Apple released new MacBooks and MacBook Pros today to great fanfare, and my read of the press is that they were underwhelmed. The new clickable trackpad is nice, as is the new (laser cut) form factor, but it seems rather odd to exclude the 17" MacBook Pro from the party. Hopefully we'll see an update to the 17 incher sooner rather than later.

The loss of Firewire on the MacBook is a big loss for us old-timer Mac types, although I can understand it from Apple's business perspective. I betcha the vast majority of MacBook owners have never used a Firewire device. However, in my case, I've grown very fond of Firewire target mode, and I own a lot of Firewire devices, too.

I was just about to purchase a Firewire-endowed refurbished white MacBook for CAD$899 today, but was too slow on the trigger. They're all gone now. I'll have to just stick with my slow G4 800 iBook for now. I actually prefer its footprint over the MacBook anyway.

They're back! I just ordered one of the refurbished white MacBook units:

Maybe in 2009, I'll get a new AluMacBook to add to the collection after Apple drops its pricing.

Is the worst behind us? On this Canadian Thanksgiving day, the US market had its highest point gain in history, and AAPL joined in the festivities. The stock was up $13.46 to $110.26, a rise of nearly 14%. AAPL beat the 11-12% gain of the market indices, but despite its upgrade to outperform, strangely enough it was merely good for a day like today. It wasn't outstanding by any means, as the screengrab below illustrates. 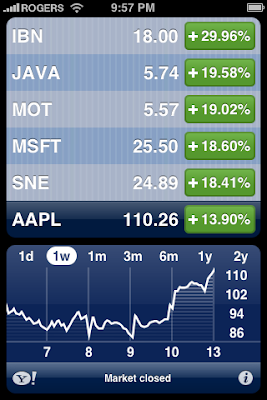 Dell, Google, and RIMM also beat AAPL's rise today, as did AT&T. On the other hand, this gain for AAPL was on top of Friday's 9% gain. In fact, it closed 28.7% higher than its low less than a week ago.

I sold the batch I bought at 108.30 for $109. Ironically, I made over 8% profit, during that two week period, the Canadian dollar dropped precipitously, following oil prices. The US dollar buys a lot more Canuckbux today than it did last month.

Tomorrow we will see the effects of the MacBook announcement, and next week we'll get the quarterly earnings report. Revenues and profits are likely to be very good, but who knows how conversative Apple will be when it comes to guidance.