The French language Mac news site macgeneration reports that the 24 inch iMac utilizes the MXM standard for the video card.

This brings us the possibility that in the future one may be able to upgrade the 24" iMac's GPU. However, doing so may not be easy.

I also expect the iMac's CPU is socketed, given that previous Intel Macs have socketed CPUs, but so far we do not have confirmation of that.
Posted by Eug at 4:32 PM No comments:

Just a few days ago we were talking about a rumoured 23" iMac. The rumours were wrong. It's 24 inches:

As expected, it also comes with Core 2 Duo, at an impressive 2.16 GHz with 4 MB L2 cache, with the option of an upgrade to 2.33 GHz. It also comes with an nVidia GeForce 7300GT with 128MB GDDR3. While the 7300GT and the older ATI Radeon X1600 compete in the same ballpark, the GeForce should be faster on average. More importantly however, there is also an option for the 7600GT with 256 MB RAM, a no-brainer upgrade for gamers and Aperture & Motion users given the low cost. In addition, this machine comes with Firewire 800 too, the first consumer Mac to do so. Very impressive.

All in all, this is an excellent package. 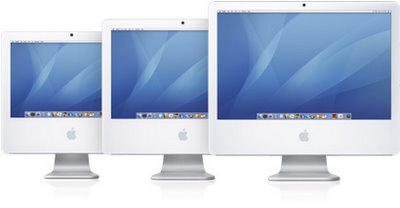 Also impressive is the low end iMac. Apple has released a Core 2 Duo 17" iMac with GMA 950 graphics. The specs are not so impressive, but the price is, at $999. This is the ideal machine for many entry-level consumers, at an affordable price.

Several weeks ago I speculated that this summer might see the release of an iMac with Conroe, a desktop-oriented version of the 64-bit Core 2 Duo CPU. Well, at WWDC we got the quad Intel Mac Pros I predicted, but we didn't get the new iMacs. Both MacOSXRumors and AppleInsider now believe the next iMac is coming this month and it is going to be based off the laptop-oriented Merom Core 2 Duo instead. That would be a good thing in some ways actually, considering that Merom is lower power than Conroe and therefore a Merom iMac may be quieter than a Conroe iMac. The downside is that it's also slower. Nonetheless, GHz for GHz, it's still a significant performance improvement over the 32-bit Yonah Core Duo in current Intel iMacs.

What's more interesting from those reports, however, is that they predict a new 23" model. That would be a wonderful addition to the iMac line, and given current LCD panel prices, it's also actually feasible. The 23" screen's 1920x1200 resolution represents a 30% increase in screen area compared to the current 20", but despite the large size, a 23-incher has finally become reasonably affordable in 2006. Such a machine, armed with a 2.0+ GHz Merom Core 2 Duo and a reasonable GPU, would make for an excellent high end consumer desktop. In fact, it would also be perfect for many users of so-called "pro" applications, such as Aperture. I've been desiring an iMac like this for years.

Another thing to note is that the horizontal resolution of 1920 pixels is exactly the same size as for 1080p high definition video (1920x1080) in HD-DVD and Blu-ray. Thus, it would be ideal if the new iMac supported HDCP for future commercial HD movie playback. Unfortunately, the optical drives for these HD formats are likely currently too expensive for an iMac, but having HDCP support would still be an nice bonus, since external HD-DVD and Blu-ray drives should become affordable in the near future.

The 23" iMac still remains unconfirmed, but in the meantime, Stefanicotine has created a mockup of what an 23" iMac would look like and has graciously allowed me to show it here: 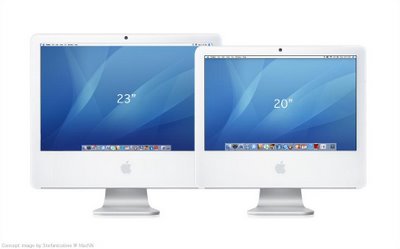 Think Secret now also reports that a new 23" iMac will be released this month, and repeats the September 12 date reported by others. September 12 is the first day of Apple Expo, and the day that Apple is said to be hosting a special media event in San Francisco.
Posted by Eug at 8:26 PM 1 comment:
Newer Posts Older Posts Home
Subscribe to: Posts (Atom)