Apple has now posted a Compatibility Checker on its website, which checks your system's specifications and determines if Apple's new flagship photography application Aperture will run on your system. 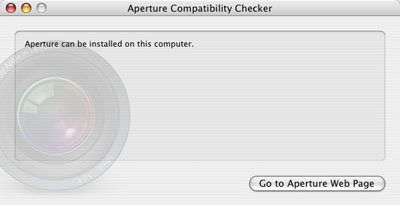 Although this iBook's 1.33 GHz G4 meets the minimum CPU speed requirements and its Radeon 9550 does include the hardware (Core Image) video features necessary for Aperture, this GPU is not listed as supported on Apple's Aperture tech specs page. Furthermore, the page states that only 15" and 17" PowerBooks are supported. That G4 PowerBook (or G5 desktop) requirement is echoed by the Compatibility Checker when run on unsupported machines (like my 1.7 GHz G4 Cube with GeForce2 MX): 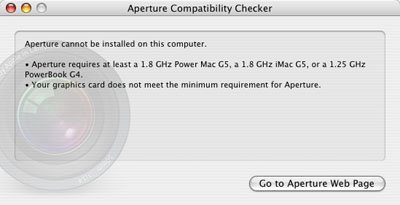 Assuming the Compatibility Checker is correct and Aperture will run on the iBook, the small 1024x768 screen resolution, the relatively slow 1.33 GHz CPU, the slow Radeon 9550 GPU, and the anemic 32 MB GPU RAM will surely make Aperture on the iBook a less than ideal experience. Still, I am pleased. Being able to run it slowly is better than not being able to run it at all.

One wonders if 12" PowerBooks with the GeForce FX Go5200 or G5 iMacs (and G5 Power Macs) with the GeForce FX 5200 Ultra are also supported. The GPUs in these machines are also compatible with the hardware video features required by Aperture, although they are not listed on the Aperture tech specs page either, and they are even slower than the Radeon 9550. I also wonder if some G4 Power Macs are supported. The more recent G4 Power Macs have fast enough CPUs and some may be running reasonably fast Core Image compatible GPUs as well, but Apple makes no mention whatsoever of supporting G4 Power Macs with Aperture.
Posted by Eug at 2:07 PM

Just heard about your blog! I LOVE APPLE! I have a Mac Mini, but i am not to technical I am only a kid.

just checked too, my 1.33GHz 12" Powerbook won't run it; "• Your graphics card does not meet the minimum requirement for Aperture."
a lot of pro users with G5 systems and especially powerbooks'll be more than annoyed at Apple all over for having shipped pro machines with such a notoriously weak graphics card.

Just a account of my own experience with Aperture 1.5.

I've been quite excited when Apple lauched the first versions of Aperture, but several comments pushed me to postopone going
shopping for it.
Since 1.5, it seems that it will make it for me. But one last thing was bothering: if I am running it on a iMac 24' at home, I was wondering how to make it on my faithfull iBook 12'with 1 Mb ram.
Well, it's so uselfull when traveling abroad if I want to make
a first sorting of the day's shoots ...
And no way to get rid of it and spend 1500 bucks on the latest MacBook !

But I'm fortunate, my daugter's boy friend is a Mac geek, and
delivered me with a CD packed with a "hacked" version of Aperture: installation went as smooth as honey, and my white 12' toy is running this supposedly power hunger app with not much problem !

Just let me temper down this good news, to prevent misinterpretation and frustration:
- no iBook 12'G4 1.33 Mhz will never compare to the last hot rods fuelled with Intel Core 2 Duo,
- the iBook screen is small (12' only !!), lot of scroll and workspace switching to be expected,
- I'm shooting mainly in Jpeg, it's true that dealing with the few Raw images I shoot is kind of a patience test (but it works, and I did not even expected it !),
- it takes ... some time to create the previews (set to the minimum, I don't need 1900x1900 on such a small screen , do I ?), but even on the big machine, especially when you are dealing with 10.000's of pictures, it is a huge work to be performed at once,
- but once it's done (let it run overnight, and sleep well !),

I would like to insure you that it is perfectly usable (again, playing with JPEG from a EOS 30D, 8+ Mb), I hardly see the "beach ball" if not at all, and up to now, could not find the reason why Apple is "forbidding" our small Mac to use this fantastic (in my opinion) tool that Aperture is.
Pros can invest in top-line Mac, we people would anyway appreciate using a tool which hold its promises: ease the forkflow from import to export !

Am facing a problem installing Aperture on my iBook. When I click on the installation Icon it's I recieve a message saying
(Alert
Your computer needs at least 1GB of RAM to run this software)

Although, I have a friend of mine using the same typical machine and he got it installed some how.

Please, if you know any special instructions I can do to over come this problem, I would appreciate..