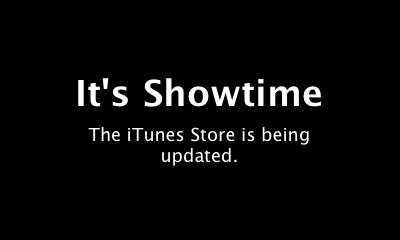 If you open up iTunes and try to enter the Music Store, you are now greeted with the above screen in anticipation of Apple's media related event today titled "It's Showtime".

It's telling that the screen says the "iTunes Store" is being updated, not the "iTunes Music Store". This lends support to the widely held belief that the event is about movie downloads. Along with this is likely the release of a new version of iTunes, as well as possibly a new series of iPods. Some have also speculated about other new hardware, such as an Airport Express with video support, or a set top box for the living room.

The event is scheduled to take place at 10 am PST, so we will know all the details in just a few more hours.
Posted by Eug at 9:50 AM