IBM has published a previously confidential PowerPC roadmap from last year which covers things from 970FX power specs to future chips such as the long rumoured 970GX. There is also mention of a proposed 970MX, which appears to be a dual-core chip with speeds over 3 GHz and 2 MB shared L2. (This should not be confused with the 970MP, which has 1 MB L2 dedicated to each core.) 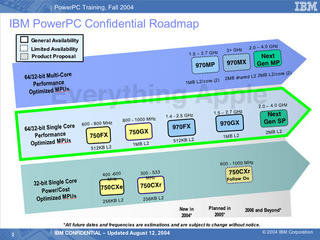 Despite the claim that the 970GX will have general availability in 2005, we have not yet had previous official confirmation of this chip. However, there has been an unofficial mention of the 970GX. Also, it remains to be seen whether or not the 970MX will ever see the light of day. In the meantime, we are still waiting the appearance of 970MP Macs, which I believe will become available within six months. 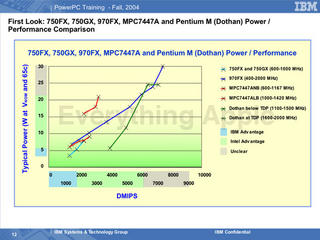 In terms of power specs, IBM claims that the G5 970FX is superior to Freescale's current G4 7447A at most clock speeds, measured by performance per Watt. What is interesting though is that even IBM concedes that Intel's Pentium M Dothan is superior with this measure at moderate speeds and possibly also at higher speeds. However, these power specs do not seem to include numbers for IBM's new low power G5 970FX. For example, the new 1.6 GHz low power G5 is listed at 21 Watts max, but the roadmap lists it at 31 Watts max, nearly 50% higher. Still, it is likely that Dothan still wins in terms of performance per Watt overall.
Posted by Eug at 6:41 PM