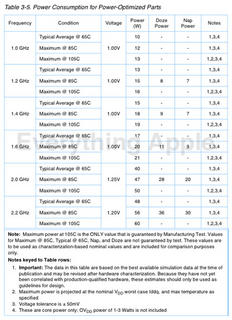 The low power 970FX can operate with a voltage as low as 1.0 V. At 1.6 GHz, the typical power usage is 17 Watts, with a maximum power usage of a mere 21 Watts. If this maximum power usage value is accurate, then that is probably about a one-quarter power savings over previous parts, and somewhat better than I had previously thought. Although no specifications are given for a low power 1.8 GHz G5 970FX, one might expect that say a 1.1 V part would come in at close to or perhaps less than my previously predicted 30ish Watts. Such a chip would make for a reasonable laptop CPU. However, as previously stated, Apple may choose to use the G4 7448 instead (also at 1.8 GHz) for the next iteration of the PowerBook, before the switch to Intel.

IBM has not yet published power specifications for their dual-core 970MP. If the single-core 970FX 2.2 GHz puts out 60 Watts max (according to the datasheet), then it seems a dual-core 2.5 GHz 970MP might be quite a hot chip. On the other hand, Apple claims the 2.3 GHz 970FX is only 55 Watts, and has done so for the past six months, so it is possible the dual-core 970MP 2.5 doesn't have to be overly hot. We won't know for sure, however, until IBM publishes its specs.
Posted by Eug at 10:29 PM